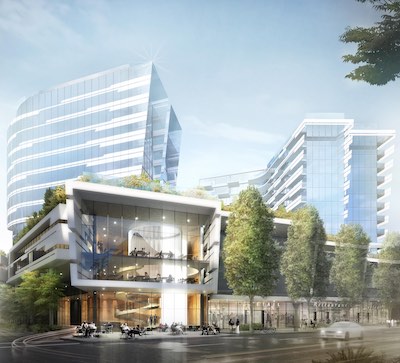 Landa Global has proposed a three-tower multiresidential and hotel development next to the Olympic Oval in Richmond, B.C. (Courtesy Landa Global)

Landa Global Properties submitted a rezoning application to redevelop a 3.5-acre warehousing site into a three-tower mixed-use development that will also add the first hotel to the company’s portfolio.

Landa is heavily investing in the City of Richmond, which is part of Metro Vancouver.

The developer is about a month away from finishing construction of its two-tower Cascade City, 271 units of residential condos, located a block away from the newly acquired site. Presales for Cascade launched three years ago and 85 per cent of the project sold out.

About 30 units remain, but chief executive officer Kevin Cheung said Landa plans to put those on the market once they’re finished and buyers can go inside to experience the views. Pre-construction and soil conditions took a bit of extra time, but construction went quickly, he said.

The newly planned condo-hotel project is directly adjacent to the entrance of the Olympic Oval, so close the design includes a plaza which connects to the arena. The site at 6851-6871 Elmbridge Way is within a growing community that includes a large grocery store and restaurants and is walking distance to the city’s scenic river walk shoreline.

Landa’s application incorporates the city’s requirement for 10 per cent affordable rental apartments within the podium and tower design. Once complete, the complex will include 369 condominiums, 36 affordable rental units and about 200 hotel suites. Richmond has many dated airport hotels, and is lacking in newer, trendy offerings, said Cheung.

“Raising the bar” for condos in Richmond

“We didn’t think we would do another project in Richmond because when we first started the Cascade project there was so much competition and so many new developments around — but here we are,” he said. “Cascade City was a tremendous success and we are building on the success of that one. This is a continuation of Cascade City.”

However, they are “raising the bar” this time, he added, bringing back the same architect team of Arno Matis Architecture and Rafii Architects, but also the design services of Toronto’s Studio Munge. Cheung said he has enjoyed learning about the hotel industry and they’ve brought on a large hotel management company to oversee the hotel.

Landa is in discussions with various hotel chains, but the brand is still to be decided.

The hotel rooms, lobby and back-of-house area are being designed to the standards required for a stylish four-star lifestyle hotel, the kind that might have a lounge area in the lobby for a cocktail or to work on a laptop. The design also includes a pool.

“This project is different in the sense that it will have a significant hotel portion, a 200-room hotel, and the unique opportunity that that creates, because it offers a style of living with a hotel component which can be the services and amenities . . . and all the things you don’t see in a traditional purely residential project.”

The rezoning application kept Landa staff busy during the past year, while it put a major downtown project on hold because of a slowdown in the luxury market in the city centre.

Landa is rebranding and adjusting the unit sizes and layouts at 1818 Alberni, a striking 21-storey development that looks like a stack of cubes, which will overlook Stanley Park.

It is hoping to launch the building in late fall or early next year.

Cheung said downtown developers are playing a bit of a waiting game, watching to see who has the courage to test the market first.

“Overall, downtown hasn’t really seen any offering,” he said. “We are all very anxious to see which project will come out first and how they perform, so I think there’s a lot of anticipation there.”

In every other market, however, he’s seen movement. In March, Landa launched presales for the Raphael in Point Grey, a four-storey marble-covered condo building with retail.

Prices for a two-bedroom unit start at $1.3 million. The project is more than 50 per cent sold.

Cheung said Landa took a bit of a risk when it held back half of the 2,000-square-foot units to sell upon completion, but despite the pandemic the building sold out and the owners have moved in.

“It surprisingly did very well since they were very large units in First Shaughnessy,” said Cheung. “We were very conservative in pricing, given COVID and the general market. So we discounted it and priced it accordingly. We didn’t go for the top dollar that we would in a hot market.”

Last year, Landa also finished selling the 42 units for Main & Twentieth, located in the desirable and trendy Main Street shopping district on the site of a former long-time rug store and coffee shop.

Presales began in 2018 and construction finished a year ago. Main Street prices are now comparable to the city’s west side Kitsilano neighbourhood, if not higher.

Cheung said it’s a good time to buy and Landa is looking at sites in Surrey and Burnaby’s Metrotown area, where other developers have major projects.

“We are actively pursuing some opportunities,” he said. “We have a pretty significantly large team and our construction team as well, so we need to keep turning the wheel and keep everyone busy.”