Panattoni’s Edmonton industrial portfolio is about to expand again with the firm kicking off cons... 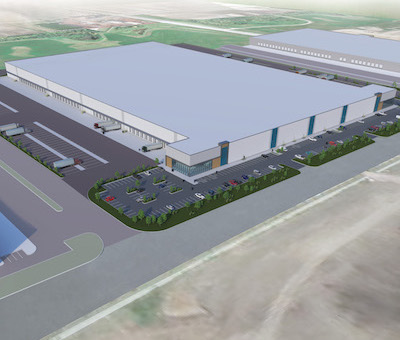 Panattoni is constructing a 548,124-square-foot industrial building on spec at the Apex Business Park in Edmonton. (Courtesy Panattoni)

Panattoni’s Edmonton industrial portfolio is about to expand again with the firm kicking off construction of a state-of-the-art 548,124-square-foot building – on spec.

“It would be the largest speculative industrial building to be built in the Edmonton market to date,” Panattoni’s development manager Mark Edwards told RENX.

The firm is partnering with Manulife Investment Management on the project. Site preparation has begun and the owners hope to have the building ready for occupancy during the summer of 2022.

The building will be the third-and-final phase of the Apex Business Park, just off the Anthony Henday Drive corridor near 170 St. NW. It is already the site of a 320,000-square-foot single-tenant distribution centre and a 216,000-square-foot multi-tenant building which was also built on spec and is 75 per cent occupied.

Edwards said Panattoni has a lot of confidence in the Edmonton industrial market right now – and that’s backed up by a burst of recent activity. The company is building a massive multi-storey 2.9-million-square-foot fulfillment centre for Amazon that was announced a couple of weeks ago.

Edmonton industrial driven by many factors

“There’s a lot of factors,” Edwards noted. “The Edmonton market has seen a significant uptick in leasing and larger-bay transactions.”

Like Calgary to the south, it is benefitting from years of tight industrial metrics in an even bigger market further west.

“One of the things that has driven Calgary to grow has been spillover from Vancouver,” he said. “The driving distance from Vancouver to Edmonton, or Vancouver to Calgary, is very similar, so you get that next stop between Vancouver and Winnipeg if you are doing the hop, skip and a jump across the country.

“We’ve certainly seen some spillover there because you’ve got such constrained markets west of here.”

The most recent statistics bear that out.

“CBRE’s most recent report said that demand outstrips supply for large-footprint industrial. So we see that being an opportunity. Also the fact that there isn’t anything this big, where a single tenant can occupy 550,00 square feet in the Edmonton market.”

He said there are a number of different types of tenants who might be interested in such a facility, among them existing occupiers in the market who want to consolidate their space.

“We do have a number of users currently who have multiple spaces, because that’s the way the market has been built,” he continued. “There’s a whole bunch of different angles that we’re coming at on this one. We can certainly see that being an opportunity for sure.

“Quite a number of tenants in Edmonton have multiple footprints where a consolidation might make sense in a more modern, more efficient building.”

There are also the growing logistics and e-commerce sectors.

The facility will be built to a 36-foot clear height with a standard eight-inch slab base and offer full building circulation for trucks and other vehicles. It will feature about 124 trailer parking stalls as well as capacity for up to 100 loading doors.

Another key feature will be a TPO (thermoplastic polyolefin) roof as well as highly efficient mechanical systems.

“The TPO roof is mechanically fastened (to the structure) so it tends to be more durable, less prone to leaks, and being white it actually reflects sunshine so it keeps the building cool as well,” Edwards said.

“We are using the Cambridge heating units which we also used in Apex 1 (the first building in that business park). They are much higher efficiency than you typically see in industrial buildings. We are designing the building to achieve LEED certification standards and it will be solar-ready.”

Edwards said even with the Amazon property and this spec build, Panattoni still has a significant land bank in the Edmonton market.

It has about 60 additional acres on which to build at the Highlands Business Park just outside the city in Parkland County, about 148 acres in the Fulton Creek Business Park where it is also partnered with Manulife, and some land near the Edmonton International Airport in Nisku.

Fulton Creek will likely be its next building site.

“We’re currently working through entitlements and we’ll be starting construction around the end of 2022 with that project,” Edwards said. “It’s about a million-and-a-half square feet in total that we have planned for that site.”

With this level of absorption for its existing development sites, Edwards was non-committal on whether Panattoni will soon be seeking to expand its land holdings around the region.

“We’re really focused on executing everything we have in the pipeline at the moment,” he said.