GUEST SUBMISSION: It truly wasn’t long ago, maybe 12 months or less, that Edmonton and Calgary we... 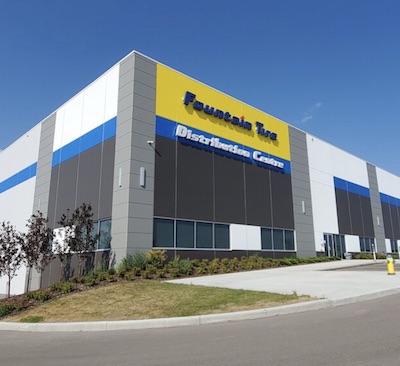 Distribution space in Alberta is hard to find these days – a major turnaround from just a few years ago. (Courtesy Bronwyn Scrivens)

GUEST SUBMISSION: It truly wasn’t long ago, maybe 12 months or less, that Edmonton and Calgary were flush, perhaps too flush, with class-A speculative distribution space.

In a matter of not years, but months, the inventory in both major cities has been absorbed by household names which have entered the Alberta market in quick succession.

Regardless of submarket – north, south, east, west or periphery – the pickings are now unbelievably slim for large distribution tenants looking to take advantage of the low-cost environment in our province and move into warehouse space within the calendar year.

What’s the background that led us here?

I remember attending industrial conferences over the past five to seven years throughout the United States and hearing about this insatiable need for distribution space, then flying home to Alberta where we sat firmly entrenched in a holding pattern as our industry of opportunity fell out of popularity.

While dealing with these perception changes, the optimism in Alberta took a rather swift and steady slide into negative territory, forcing difficult decisions for many businesses and building owners: consolidate, terminate, relocate, or hunker down.

This created a harsh reality for landlords who had been developing speculatively in a market that had been running positively until the end of 2014. Alberta had incredible growth during a boom from 2002 to 2008, then again from around 2009 to 2014.

When a large industrial development is determined viable, it’s often 12 to 18 months before any tenants can begin taking possession. A lot can happen in Alberta in 18 months!

The result was overbuilding to a barely palpable demand throughout 2015 and right into 2019, leaving Alberta with multiple industrial parks marketing multiple 100,000-square-foot-plus buildings.

These developments (not to mention existing class-B and -C assets) held vacancy for what turned into years as tenants and landlords adopted a “wait-and-see” approach through federal elections, commodity swings and of course, a global pandemic.

Fast forward to the end of 2020, and a perfect storm has rolled into Alberta to create a backlog of demand for distribution space. It’s a movement that’s been steamrolling industrial parks globally, but for the most part was not experienced locally.

In a province with a nearly endless supply of developable land, coming out of six years of a tenant’s market, how is this possible?

The decision makers who say yea or nay to investing in Alberta, typically headquartered in Eastern Canada, have been bearish on the province for some time.

It’s easy to see why this would be the case when you factor in the change in pragmatism around energy development and combine it with the popular perception of Alberta as a one-trick pony (I am happy to elaborate on why this is not the case).

Then, we layer in millions of people being mandated by law to live, work and play at home, expediting an e-commerce trend that had been growing steadily, but surged to new levels through the pandemic.

Why go to a grocery store when you can order online and have the goods delivered at your doorstep? Why hold off on purchasing that hot tub or RV when you can’t fly anywhere for the foreseeable future?

Why stay holed up in a 600-square-foot downtown condo (you can’t enjoy the perks of downtown living anyway), when you can buy a brand new home in the suburbs with a backyard for your new puppy?

All of these questions, and many more, flooded through the greater population, causing unbelievable demand for consumer goods, a residential real estate bubble, and overall . . . the need for more distribution space everywhere.

The last element to this trifecta is the supply side of commodities to create and build more goods and real estate.

2020 was such a unique year because globally everyone was going through the same adaptations, at the same time.

This put enormous strains on manufacturing, fabrication, assembly plants and mills – which were also impacted and shut down erratically by COVID-related restrictions – to get more goods to market for an unyielding demand from consumers.

This resulted in two compounding effects on the demand for industrial warehousing and distribution product:

The miraculous result is a demand swing that may not be fulfilled by existing or new warehouse supply within the next six to 12 months, particularly for large distribution tenants.

All of a sudden, in classic Alberta form, our province is back on the radar of institutional and private investors alike who are seeing the value in our market. Not only is Alberta trending positively from internal demand, but on a broader level from displaced demand coming out of hotter markets like Greater Vancouver.

Tenants are seeing the benefits of:

In the same way Phoenix and Las Vegas are absorbing the overflow from California’s land-constrained, highly active metropolitan areas, Calgary and Edmonton are becoming the perfect solution for a robust and highly competitive warehousing market in British Columbia and the Lower Mainland.

These cities, which circa 2020 were deemed “overbuilt.” are now in a position where they cannot service more than a couple of user groups larger than 150,000 square feet within the calendar year.

Bronwyn Scrivens Associate Broker, Omada Commercial
Website: https://bronwynscrivens.com/ Bronwyn began her brokerage career with Cushman &amp; Wakefield in 2014, transitioning to Omada Commercial in 2019 to grow the Industrial Team. Prior to this, she graduated from Cornell University in Hospitality and Facilities Management with a Major in Commercial Real Estate studies. Bronwyn sits on the NAIOP Edmonton Board of Directors, is the Chair of the NAIOP Edmonton Developing Leaders Committee, and is actively involved with NAIOP corporate. She was also honoured to be chosen as one of 10 leaders from across North America for the Prologis and NAIOP Diversity in Commercial Real Estate Award. Bronwyn is highly regarded as a thought leader and disruptor in her market.